Grammatical Errors in the Qur’an 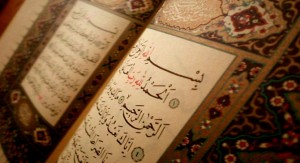 This claim that the Qur’an has grammatical mistakes has no historical precedent.

Some critics claim that there are some grammatical errors in the language structure of the Qur’an. How are they mistaken?

Actually they are deeply mistaken. This claim that the Qur’an has grammatical mistakes has no historical precedent. Because the Arabs themselves before Islam were not a people of literature. They were Bedouins and lived in tents and villages, they didn’t have brick constructions or things like that. They weren’t a people of civilization, of literature, of universities, and of libraries. Islam brought victory to these people both socially, politically, and military.

The world of Islam expanded and all of a sudden a good number of Persians, Romans, Abyssinians adopted Islam. These were people of civilizations, of universities, of libraries and so on. They wanted to learn Islam because this is the language of the religion they have just accepted. When they came to Islam, there was a movement to compile and codify Arabic grammar. In other words, the Arabs of ancient times didn’t codify, but it came to them naturally. They did not sit to learn sentence structure or things like that because it was their mother tongue. Historically, for a child to learn eloquent speech, the Arabs used to send them to the deep desert where the language is pristine and more pure. When Islam expanded, grammar has been codified not for Arabs but for non-Arabs.

What did they look at as the standards by which the Arabic grammar should be codified? Actually, they looked at the Qur’an. This single document which had transformed an entire society and eventually a multi-national civilization. They looked at that as the basis of deriving grammar. So, now centuries later, when somebody comes along and says that the Qur’an has grammatical mistakes, that will not make any sense because the grammar itself was codified based on the principles of the Qur’an which is considered unanimously as the peak of eloquence [the highest point of literature in Arabic language] and this is something that has been acknowledged by Muslims but Arab Christian have been around for a while. When Arab Christians talk about the highest form of language, they speak of the Qur’an historically. In more recent times, the antagonism, political climate of the world, and all of that has come in to play and these kinds of arguments have come up, so they have other agendas, but it is not only the case.