Qur’an: The Book that Reads You 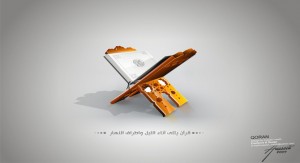 And is it not sufficient for them that We revealed to you the Book which is recited to them…” (Al-`Ankabut 29:51)

There are two kinds of evidences and I have already shared with you before; intellectual evidences, spiritual and moral evidences. We talked about, for the most part, the kinds of the intellectual evidences, but the Qur’an also calls on the human beings on the sense of decency which the Qur’an terms Fitrah (the sense of preprogram decency inside of us that appeals to reason and morality.) The tragedy of our time is that the Qur’an portrayed as a demonized book that calls to race killing, injustice, hatred, and intolerance.

All of these negative terms are used in regards to the Qur’an and it is carelessly, maliciously quoted, and mistranslated often to create this sentiment among people who say I’d rather never read this book. I have met someone personally that hated Islam and decided one day to go to the library. He said, “I hated so much and I’m going to read and get even more angry.” He reads it at the New York Public Library in Queens. He went there to read the Qur’an and I think that he read three half of it and came out and he was a Muslim.

He himself told me that he was not reading the Qur’an and the Qur’an was reading me. That is what he said.  “It was telling me about my life.”

The Qur’an is talking about you not talking about the stories of the old times. Now, when you talk about the external evidence, it is your own conscience. The Qur’an is enough as evidence. Actually, the Arabs said, “Is there any other evidence, you get anything from the sky that you want to show us (something comes down), some springs of water come out, or anything else? And what did Allah say basically in Surat Al-`Ankabut (the 29th chapter of the Qur’an)?

And is it not sufficient for them that We revealed to you the Book which is recited to them…(Al-`Ankabut 29:51)

So, there are two things; your own moral conscience and the Qur’an itself.

Enjoy listening to this lecture with Sheikh Nouman Ali Khan.